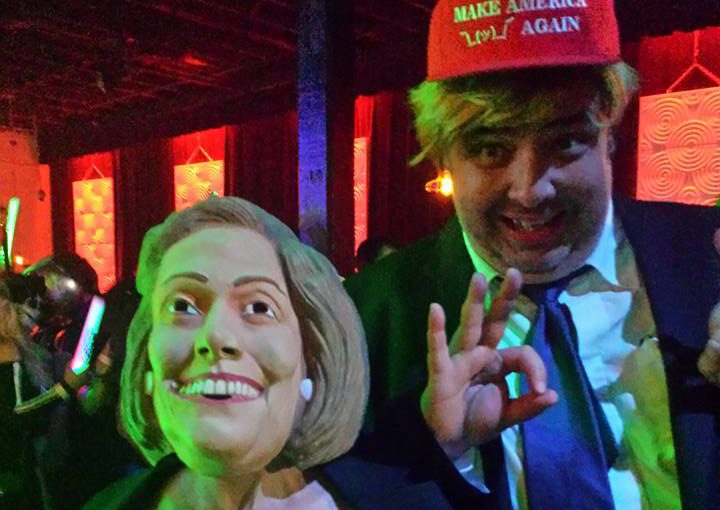 I gained a new insight into the Trump phenomenon this weekend, in a most unexpected way.

(And before you’re all like “There he goes again with his anti-Trump rantings”, hold on.  This post isn’t anti-Trump.  I am actually coming out right now and saying I am pro-Trump.  Well, I am pro-Trump: the ideal.  Relax, I firmly remain anti-Trump: the man. But this post is not about the man. I’ve had plenty to say about that already, and frankly there’s not much more can be said that hasn’t been said before. No, this post is about the ideal of Trump, which I fully support. And it is about a stuffed Pomeranian, but more on that later.)

Okay, how this all started…

Every year our company has a Halloween party and costume contest.  That’s something of an understatement.  In past years this has been a week long Halloween extravaganza, with multiple costumes, themes, skits, and daily voting, all leading up to one final week long team winner, and usually not a small amount of controversy over the voting process.  In recent years this has been augmented with us then attending the “13 Ugly Men” Halloween Party – one of THE big social charity events of the season in these parts.  This year, due to popular demand, and escalating expenses, we scaled it back to one day of contests, and the big event that night, but… it’s still a big deal.

One of the things I love about where I work is, the people there are, well, the only way to put it is… they are competitive as fuck.  It didn’t matter the prize, they just wanted to win it. And they go all out. Thus the escalating expenses from a week long extravaganza.  But even in it’s one-day scaled back form, it is still a highly competitive event. You’ve gotta bring your “A” game.

When deciding on what costume I would do this year, I looked at the rules, and one of the categories for points was “scariest costume”.  I thought to myself, what is the scariest thing I have ever seen, and my answer came to me immediately.  I would go as Donald Trump.

There’s a old comedy trope about Trumps hair, going back decades, that it’s actually a small, furry, possibly rabid, animal the sleeps on his head by day, and presumably wanders off having it’s own adventures by night.  So there was my hook.  Instead of the usual Trump wig, I would wear a stuffed Pomeranian on my head.

Now, the logistics of strapping a Pomeranian to one’s head is more difficult than one might expect.  (There’s one of those sentences I never thought I’d say.)  First, said stuffed Pomeranian wasn’t quite big enough to cover my giant head, so I ended up assembling something of a Trump-hair-sandwich with safety pins, a Trump wig on the bottom, a poly-fill eviscerated Pomeranian in the middle, and the ubiquitous red hat on top. 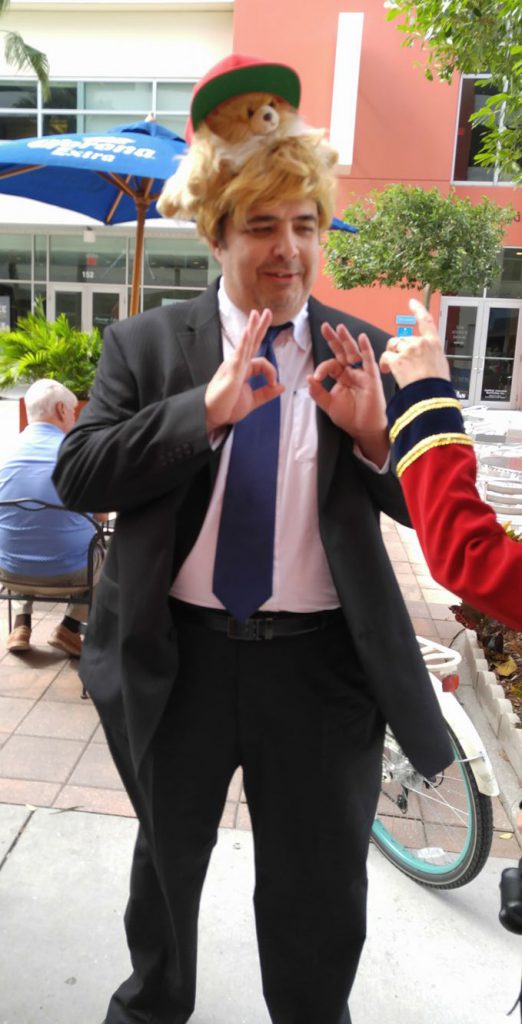 Just a quick word about the hat. My red hat says “Make America ¯\_(ツ)_/¯ Again”. I wasn’t about to risk any of my money going to Trump’s pocket by accidentally purchasing official campaign merchandise.

This arrangement had the desired effect.  It was a Trump costume, with a hook, a slight tongue-in-cheek nod that the costume was meant to be humorous.  It was meant in good fun, and it was received as such, even amongst the handful of Trump supporters in our office.

Unfortunately all was not well.  While visually it work perfectly, it was somewhat top-heavy, and for reasons I won’t go into, we were outside on a windy day, and as you might expect a Pomeranian to do, it frequently leapt off my head and attempted to scurry away.

This was not a problem for the costume contest during the day, but for the big party that night it would be a big problem.  There would be much dancing, or in my case white people bouncing up and down, and much moving about, and the floor of the venue was not a place I wanted to retrieve something from to then put back on my head, so… Modifications were needed. Reluctantly, after all we had been through, I made the tough call, and decided the Pomeranian must go. Yes, I fired the Pomeranian.

This minor alteration had an unexpected consequence at the big event. Originally I had envisioned my costume as Trump: the Monster.  Maybe with devil horns poking out of that massive hair, or maybe Frankenstein bolts attached to an orange neck, or… well you get the idea.  So many possibilities.  But early on I decided that while it might be funny, out of respect for a small handful of people I know who liked him, but not for all the wrong reasons, demonizing him was not the best way to go.  No, I decided instead to stay closer to the truth, and portray him as Trump: the Buffoon.  Thus the Pomeranian for a hairpiece.  But now, that visual clue was gone.  I was just Trump.  There were no clues that I was Trump: the Buffoon, or Trump: the Monster, although a few who saw me made that interpretation anyway.

I started getting genuinely heart-felt thumbs-up, statements of adoration like “Love it!” and “You’re wonderful!”  There was lots of shaking of hands and taking of pictures, and appreciative smiles.  They genuinely adored this guy, and they instantly liked me, a perfect stranger to them, for this loving homage I had created to their hero.

That’s when it occurred to me… Well a few things, but first it occurred to me that, for the duration of this night at least, I had no political opinion. None. I would be just a guy having fun with a bunch of other humans having fun, and together we would celebrate, well I don’t know what exactly, but we would celebrate.  Tonight I would be a member of everyone’s tribe.

And it worked.  The highlight of the evening was when I ran into the unknown woman in a Hillary mask. I admit, that was a tense encounter at first, but she was a good sport about it, and I was committed to being a good sport about it, and it led to some wonderful photos. (Let it be known, far and wide, to one and all… I grabbed nothing.) Somewhere out there too are some interesting selfies of me with a very convincing Ken Bone.

But the other thing that occurred to me is, this really was hero worship.  This guy, or at least this image of a guy, is the hero they wanted, and after a few hours, I very much wanted them to have that hero. They deserved that hero, even if I knew deep down, having studied this man for literally decades, that this man was nowhere near the hero they held him to be. I wanted it for them.

I’ve talked with some of you before, for some time now, about the fact that I actually LIKE the idea of Trump. I do. An outsider, coming in to shake things up. Someone bold who tells it like it is. A businessman, not a politician. I like that. That really is what we need. That’s what I want too. That is EXACTLY who I want for president.

That ideal was H. Ross Perot in 92, before he went bat-shit crazy and dropped out of the race.  Believe me, up until that point, I was firmly on the Perot train. He was everything people want to believe Trump is today. Only, he was the real thing.

I have studied businessmen all of my adult life. There are several I would love see run for president. I know which ones are brilliant, and which ones are mediocre, and honestly, I would support even the mediocre ones (Carly Fiorina for example). But in that study, I also knew Trump, I knew his successes and failures, I knew how he ran his businesses and the philosophies that guided him. And I knew, even before he announced his run with the Reform Party in 2000, I knew that he was a fraud, albeit at times a successful one, and I knew beyond anything else that he was unequipped to lead a nation.

Others don’t see that, they don’t see Trump: the Very Flawed Angry Little Man, they see only Trump: the Hero.  And no matter what is shown to them, all they will ever see is Trump: the Hero. They just want it SO bad. They are practically willing it to be true. And I don’t blame them for wanting it, like I said, I do too. I wish it were true. I want a Trump. Just not this Trump.

On the other hand, I do blame them, at least a little, for allowing themselves to become so blinded by Trump: the Hero that they cannot see the truth of Trump: the Man. And I have no idea what it will take to shake that belief in Trump: the Hero. If nothing so far has, I don’t know that anything can. What does a hero have to do for you to lose faith in him?

When Trump said he could stand in the middle of 5th Avenue and shoot someone and not lose any support, he was right. He knew then that they were following Trump: the Hero. I think he was a surprised as anyone.

Of course, this is the great danger of dictators.  They are all seen at first as the conquering hero.  The champion of the people. The savior and liberator of the common man.

ALL peacetime dictators begin this way. All of them. It is HOW they come to power. This is the path of Trump: the Dictator.

So what have I learned from all this?  Well, first let me say, there are people out there who support Trump because they believe he supports their racist, bigoted, “alt.right” ideals. And whether Trump does or not, he certainly does nothing to dissuade them, and what matters is that they believe he does. Those are the true “deplorables” Hillary was speaking of.

So, yeah, I get it.  I understand the appeal. Deep down I feel that same appeal, I desire it too. I wish I could join you, the hope and joy you feel seems absolutely blissful.

But, I cannot. It was only a moment, and I must return to the real world. I cannot abandon the rational world, the world of facts. I will stubbornly cling to it with my dying breath. Your world is more appealing, but it’s a false hope, it’s an unfounded joy. It is the bliss born of ignorance. I cannot un-know what I know. I cannot un-see what I’ve seen. And I cannot live in a dream world, no matter how pleasant the dream.

If you chose to remain there, in your dream, in your bliss. I understand. And I sympathize. I share your desire. I believe in your ideals. I yearn for the same champion as you. But I cannot worship your chosen hero. I have seen what you wish him to be, and it is beautiful, but I have also seen him for what he really is.