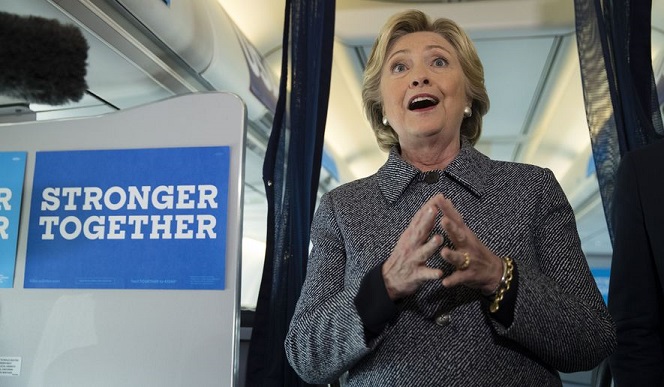 There’s been a lot said lately about Hillary Clinton viciously attacking her husband’s accusers. I admit, I never really followed that closely the soap opera that was the Clinton marriage. Now that it’s come to the forefront again, I thought, in the interest in fairness (I don’t know if you’ve noticed, but I’ve been kinda harsh on Trump lately), I really ought to take a close look at this. I have to say, what I found was indeed shocking. I was truly surprised at the viciousness of these attacks.  Let’s recap what I found.  Join me, won’t you?

Might as well start at the top.  The cigar-hiding intern who nearly brought down a presidency.  What Bill (allegedly) did:  He porked an intern. Certainly that raises some ethical questions, but to be fair, there is no indication that any of their, ahem, “interactions” were anything but consensual.  What Hillary (allegedly) did: In a private (let’s say “locker room”) conversation, she called Monica, and I quote, a “narcissistic loony toon”.

Wow!  I know.  Talk about the mouth of a sailor. I’m sorry you had to hear language like that, but I wanted you to get the full impact of it.  Certainly someone who talks like that has no business being president.

Another big name on the Bill Clinton hit parade.  What Bill (allegedly) did: Exposed himself and propositioned her.  She turned him down.  Perhaps if he’d had a Tic-Tac first, or bought her some furniture, or maybe just grabbed her by the…  Well, we’ll never know.

Anywho, he was governor, she was a state employee, so she sued him for sexual harassment. Case was eventually dismissed before reaching trial. Paula’s legal team appealed. Bill settled, with the usual “no admission of guilt”.  Paula got $850,000, most of which went to her lawyers.

What Hillary (allegedly) did:  While there is no indication from anyone that Hillary did anything to attack Paula directly, according to Paula, Bill and/or Hillary “sent out people to dig up trash on me”.

But, her writer buddy, Sid Blumenthal (the real one, not the one quoted by Russian propagandists), had lunch with Kathleen’s writer buddy, Christopher Hitchens, where Chris mentioned a recent “60 Minutes” piece on the situation, to which Sid replied “Well she may look good today,  she’s not going to look so good by Friday.”  Sounds super menacing, right?

Of course, to the casual observer this sounds like nothing more than an observation on how quickly tides turn in the media.  But we know better, don’t we. That was clearly a threat, straight from Hillary’s mouth. Well, not so much straight as by way of a guy named Sid, which is, of course, the most threatening way to deliver a threat. And we all know how threatening writers can be, what with that whole mighty pen sword fixation they have.

And the hit parade continues.  What Bill (allegedly) did:  Had a long term affair with her.  By all accounts this was a consensual relationship.  What Hillary (allegedly) did:  Possibly hired a private investigator.  Now that’s just a crazy, wacky, totally unhinged thing for a wife to do when she suspects her husband of cheating.  I mean honestly, who does that?

Also, she called Gennifer a “failed cabaret singer who doesn’t have much of a resume”.  Again, I must apologize for all this “locker room” talk.  I would never use such language, were it not a direct quote, but it’s important you hear her exact words. Certainly we should never accept such crude and offensive language from a candidate for the highest office in the land.

I’ve saved the best for last.  This one is special, and for the first time, we see clear unmistakable signs of an actual attack by Hillary against one of Bill’s accusers.  I know, I know, I made you wait, but trust me, it’s worth it.

What Bill (allegedly) did:  He raped her.  Or not.  She did not report the attack to law enforcement, but she did report it to the Wall Street Journal, the Washington Post, and the New York Times. Skip ahead a few years, and she is called to testify in the Paul Jones case.

Now here’s where it gets weird. In a signed affidavit, under oath, she DENIES that Bill raped her. Later, when Kenneth Starr is investigating the Monica Lewinsky scandal, she denies the denial.  So, did he or didn’t he?  At this point, only Juanita knows for sure.

But, and here’s where it gets really interesting, if we rewind to 1978, just after the attack allegedly happened, but before she went to the newspapers, she tells the story of the night Hillary threatened her.

Hillary approached Juanita at a fundraiser and said, and I quote, “I just want you to know how much Bill and I appreciate the things you do for him. Do you understand? Everything you do.”

Woah! Right? Did you hear that? I know that to the casual observer, that sounds like the normal kind of thing a candidate’s wife might say to literally anyone at a fundraising event.  But you and I know, that’s some serious twisted “House of Cards” shit right there. Thanking her? For everything she did?  Damn, that’s cold blooded!

So, not only does Hillary let Juanita know that she knows what’s going on, but she does it in such a way that if she didn’t know what’s going on, this Juanita chick would look like she’s batshit paranoid. Only Juanita’s not batshit paranoid, she would only be paranoid if Hillary didn’t know.  But Hillary clearly knows, I mean why else would Hillary go so far out of the way to look like she didn’t know?  Clever, right?