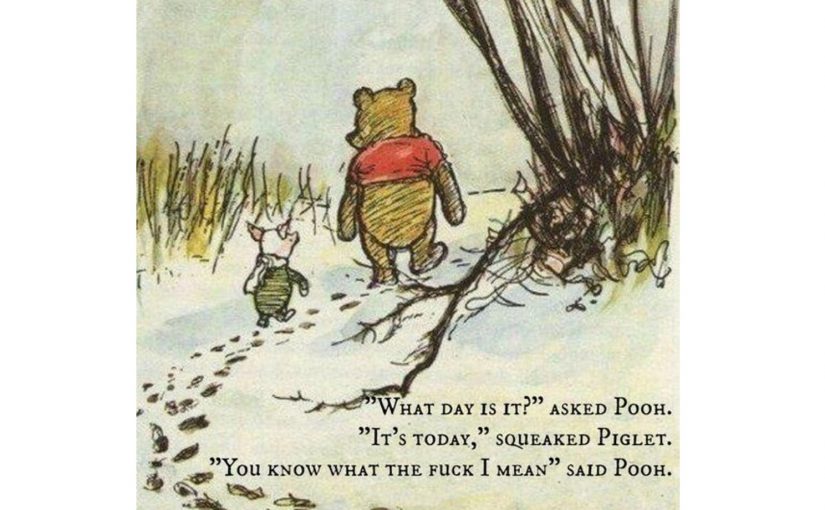 I don’t much feel like dealing with the real world today, what with all that’s going on, it’s just too much to deal with, so… Let’s take a break. Let’s talk a bit about Winnie the Pooh instead.

I’ve recently taken a new look at these characters, and I have some things to say. (I know, surprise, right.)

First the titular bear himself, Winnie. I think it’s time someone mention the elephant in the room here. Winnie has a serious substance abuse problem. His honey problem is classic addict behavior. It’s all he thinks about, it’s all he talks about, it’s all he does. His entire day is spent either searching for honey, eating honey, or depressed that he is out of honey. Pooh is an addict.

And it’s beginning to affect his health. It’s no secret he is somewhere north of his ideal weight. It got so bad recently that he got stuck in Rabbit’s hole. (He was breaking and entering in search of, guess what, more honey.) While stuck in the hole, with his friends desperately trying to unstick him, all he can think about is how he can possibly get more honey. WHILE HE IS STUCK THERE. This bear has a serious monkey on his back. A honey monkey, and it’s not going away. It’s time for an intervention.

Which brings us to Rabbit. Don’t look for any help there, Rabbit is not just an enabler, he’s practically his dealer. Sure, he makes a show of trying to hide his honey from Pooh, but it never works out. Pooh always finds the honey. Now Rabbit can handle his honey, no problem there, but as Pooh’s friend he’s not doing the bear any favors by continuing to supply him. Nine times out of ten, when Winnie is off on a honey bender, it’s Rabbit’s honey he is bending on.

Speaking of enablers, Piglet’s no help either. At least he’s not supplying him, but the most he ever does is an extremely timid, “Oh gee, I don’t think we ought to do that…” half baked protest, which the bear completely ignores, and Piglet goes on to continue helping Pooh with whatever misguided scheme he’s cooked up to score more honey. Piglet’s fear of losing his friend is completely overshadowing his responsibility to that friend. He will go along with literally anything, just to appease him. Co-dependent much, Piglet?

Then there’s Eeyore, the clinically depressed donkey. That’s some classic textbook depression going on there. It’s time to remove his belt and shoelaces. He is “this far” from becoming just another statistic, but do his friends help him? No, they’re far too self-absorbed to care about old Eeyore. Oh sure, they throw him a party. Once. But is that what he really needs? No. He doesn’t need a party. He doesn’t need to “just cheer up”. He needs help, professional help. HE NEEDS THERAPY. And maybe new friends. But definitely therapy. And by the way, that whole live version of “pin the tail on the donkey” game they play with him. That just seems cruel.

On the subject of professionals, let’s turn to Owl, the intellectual elitist of the group. You would think he could help, right? No. Typical elitist, obsessed with all the wrong things, completely detached from the lives of common people around him, he offers nothing but absurd useless ideas that, while they might sound good on paper, to other elitists, in the real world they just fall flat. They don’t work. They don’t help. Go back to school you egghead, you’re not helping anyone. And take that self-important, condescending attitude with you.

Speaking of needing help, consider Kanga and Roo. Kanga, a single mother, struggling to get by, and Roo, her attention-deficit, hyperactive-disorder handful of a child. Kanga is a delightful woman, and she does the best she can. They’re getting by. Barely. But they could sure use some help now and then. But with this lot, does anyone even offer to babysit? No. But who could blame them, that Roo, he’s a nice kid, but he is a handful. Kid definitely needs medication.

Speaking of irresponsible. What’s up with Tigger. Bouncing around from place to place, unemployed, no prospects, no visible means of support. Yeah, sure, he lives “in the moment”, but you’ve got to give some thought to you’re future, don’t you? Come on, my tigga, you just gonna bounce around your whole life, mooching off others? That’s no way to live. Get a job!

It all makes me wonder… Christopher Robin, just how bad is your life that this, this collection of characters, is where you go to escape? I mean, yeah they’re nice and all, but… these guys are messed up. Eh, nevermind. Maybe it’s time I got back to the real world now. This Hundred Acre Hood is just too much to deal with.